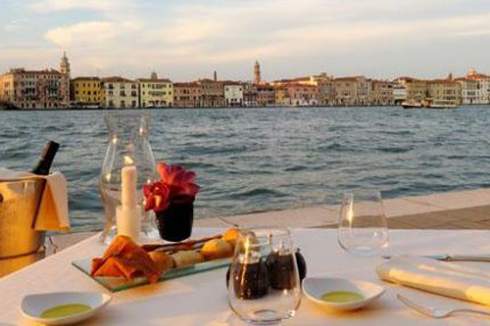 Built on land, isolated from the waters of the lagoon, without being able to cultivate wheat and wheat, nor “anything at all to the human lives”, Venice has nevertheless held a primary position in the art of gastronomy for centuries.

By virtue of necessity, the Venetians quickly become skilled merchants, to obtain those primary goods that were not there in the Lagoon, but what was originally meant to be a simple source of subsistence soon turns into a source of income, as they begin to import from distant markets not only wheat and wheat but also spices, sugar and other culinary goods unknown in Europe.

In advance of several centuries Venice soon senses the potentiality of these goods and literally invents marketing, realizing that in order to be able to sell a product well, it is necessary to create demand and not to wait for it to form itself. This is why Venice itself “invents” the luxury of spices. But not only that, always ahead of the times, he also invented the packaging, putting on the market the famous “Venetian bags”, that is mixed spices already packaged and ready for use!

A direct heir to the Byzantine and Roman tradition, lagoon gastronomy is one of the first to confront other cuisines in the world: from Muslim to Austro-Hungarian cuisine, passing through Spanish and French cuisine. These are encounters that arise from the coexistence with the Islamic populations on the markets of the Levant and from the confrontation with the foreign minorities present in the city since the earliest times.

Between the fourteenth and sixteenth century new and significant new products add to this basic richness: from the icy waters of the northern seas comes the codfish, alias stockfish, an authentic culinary revolution, in an era when there is no refrigerator.
In an already privileged situation, the Renaissance invests Venice with all its innovative energy, and how could it be different in a city that can use all the weapons of seduction, including that of food, refined and luxurious, sending messages of political power to foreign guests gifts by tramortandoli with rivers of spices, sugar and gold leaves on oysters?

But the real greatness of Venice was to know how to get out of the kitchens and to get to the libraries, which then means going out of the ephemeral dimensions to stay in the centuries. A unique case in the whole peninsula, here is developed a great gastronomic publishing with the publication of recipes, translations of dietary books from Arabic and Greek, agricultural treatises and travel reports that inform about the discovery of new products.

The end of the sixteenth century brought to a close the age of dishes buried by a mountain of spices, and the wind of new modern tastes brought by the French came to Venice. The consumption of luxury takes other roads, and for Venetian merchants it no longer makes sense to fill the holds of ships with those spices that have made their fortune. But the patricians certainly do not lose heart and recycle themselves by taking the mainland road, with major land reclamation, agricultural investments, and the cultivation of those first fruits that revolutionize the Veneto region in the form we still see today.

Between inns and finger food, enlightened chocolates and French chefs, we reach the eighteenth century. The Republic is extinguished but not the gastronomy, which is tempered by the Central European tastes imported from Austrians. The first bourgeois recipes of the 19th century are printed and the cuisine is internationalised.
In the twentieth century, linked with a concrete and iron bridge to the mainland, Venice lost its insularity. The tourist replaces the traveller, the bacari are transformed into bars all the same, the cicchetto all too often leaves room for pizzas and frozen sandwiches.
The invasion of globalized taste does not however cancel the good Venetian cuisine, which remains perched in a few rooms and in the intimate dimension of the house.