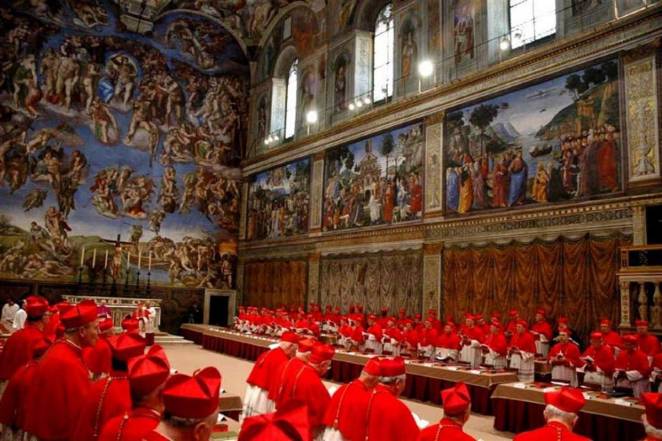 The term conclave therefore indicates both the place where the cardinals meet to elect the pope and the assembly itself.

The origin of the Conclave

The Conclave originated with the death of Pope Clement IV. The cardinals gathered in Viterbo were unable to reach agreement on the successor and left the Holy See vacant from 29 November 1268 to 1 September 1271. To force them into a decision Ranieri Gatti, governor of the city, had them locked up in the papal palace and ordered them to remain there until they had elected the new pontiff.

He also had the roof removed from the palace and severely reduced the supplies. He thus obtained the prompt election of Gregory X. During the second Council of Lyon (1274), Gregory X decided that on the tenth day after the death of the pope or the day after his burial, the cardinals would gather in the city where the pope had died and be locked up until they had provided for the election of his successor.

It was then customary to hold the conclave always in Rome, which must begin no later than eighteen days after the death of the pope.

At present the seat of the conclave is the Sistine Chapel.

The unfolding of the conclave


On the day set for the election, the cardinals are locked up under the supervision of the conclave’s marshal. With them some prelates, who act as secretaries, and the servants are also locked up.

The ancient regulations prescribed that the meals served to the cardinals be progressively reduced so that on the eighth day only bread and water were served. This custom has now been abandoned.

The cardinals meet twice a day, in the morning and afternoon, in the Sistine Chapel, to proceed to the ballot. First, however, they must swear on the altar to act without intrigue and out of personal interest.

During the conclave the most urgent affairs of the Church were carried out by the Dean of Cardinals assisted by three other cardinals.

Election and proclamation of the new pope


The election of the pope must take place by ballot; the constitution of Pius XII (1945) provides for two in the morning and two in the afternoon; all the conclavists are bound to secrecy under penalty of excommunication.

The cardinal is elected who reaches the votes of at least two thirds of the voters.

Before the decision of Pope John XXIII, after each ballot the ballot papers were burned: together with the damp straw, when no positive result was obtained, thus producing a dense and dark smoke (black smoke); otherwise they were burned by themselves: the white and light smoke (white smoke), coming out of a vent overlooking the Sistine Chapel, announced that the election had taken place.

John XXIII then established that the ballot papers should be preserved: but the tradition of smoking has remained.

Immediately afterwards, the Dean of Cardinals asked the elected one for consent to the election. To the affirmative answer, he was asked how he wanted to be called.

The newly elected immediately acquires full jurisdiction over the whole Church; he wears the white papal robes and reaches the large window above the central door of St Peter’s to give his blessing.

Already before, however, the final result and the name of the elected one were proclaimed, from the large window of the façade of Saint Peter’s, by the Dean of Cardinals: Habemus papam (“we have the Pontiff”).